Chair and my fellow colleagues, I am here speaking on my behalf, as DPP has not yet reached a conclusion regarding how to achieve marriage equality. Therefore, what Legislator Chang Hung-Lu (張宏陸) has just said, previously the very long speech given by Legislator Ker Chien-ming (柯建銘) and my speech are all opinions of ours and ours only, and do not represent the party. I very much agree on Legislator Lin Wei-Chou (林為州)’s point that we hoped when we discuss this (marriage equality) issue, we can approach it with reason, however, it is a pity that some of the speeches given by my fellow colleagues and some of the recent voices from all over the society have suppressed the possibility of a reasonable discussion. Even if the amendment to the Civil Code is approved, will our national ID cards be revised? Will “the father and the mother” (on it) be replaced by “the two parents”? We all know they will not. To all existing families, the revision will not be happening. And yet some of my colleagues have spread the rumored change with graphs. Those voices from Zhongshan S. Road certainly represent some of the society as those from Jinan Road do. But as a Legislator, are our capacities, our roles and our responsibilities just saying what we hear from streets, without a thinking of our own and without investigating? Are our responsibilities not helping reduce conflicts and settle disputes when the society discusses important issues? Most importantly, aren’t our responsibilities preventing those malicious slanders from circulating Legislative Yuan?

I must mention the worst kind (of those voices) here. That is if the society has not yet reached a common ground, bills of critical controversy shouldn’t be passed. If you agree on it, please recall the situation of African Americans. Just a little more than 50 years ago, the US ended racial segregation in the Civil Rights Act of 1964 and approved the voting rights of people of color in the Voting Rights Act of 1965. At that time, did the American society wait until it reached a common ground to pass those Rights Acts which today we take for granted? When the Civil Rights Act and Voting Rights Act were passed, were clashes not occurring in their society? During that period, and even when the US ended racial segregation, the US National Guard had to protect those African American kids who went to schools that used to be for White people. Wasn’t there any conflict? But (they did so) for this very reason… people were willing to overcome conflicts and deal with disputes, and they hoped the society can be progressive. More than half century ago, if the US Senate and the House had been like some of our colleagues at Legislative Yuan, saying we should only pass those bills when the conflict is vanishing from the society, racial segregation could have remained today in many states in the US, and people of color wouldn’t have been able to vote. I DO NOT WISH TO SEE that we wait until the conflict is gone to pass the (marriage equality) bill and assert smugly that it is Legislative Yuan’s mission and responsibility to do so. I would call such act a hypocrisy. If we are responsible for what we believe, and if we have the courage to recognize that our mission is pushing for a progressive society, we shall bravely embrace controversy, we shall set up an example for the society, and we shall lead the society to move forward. Thank you. 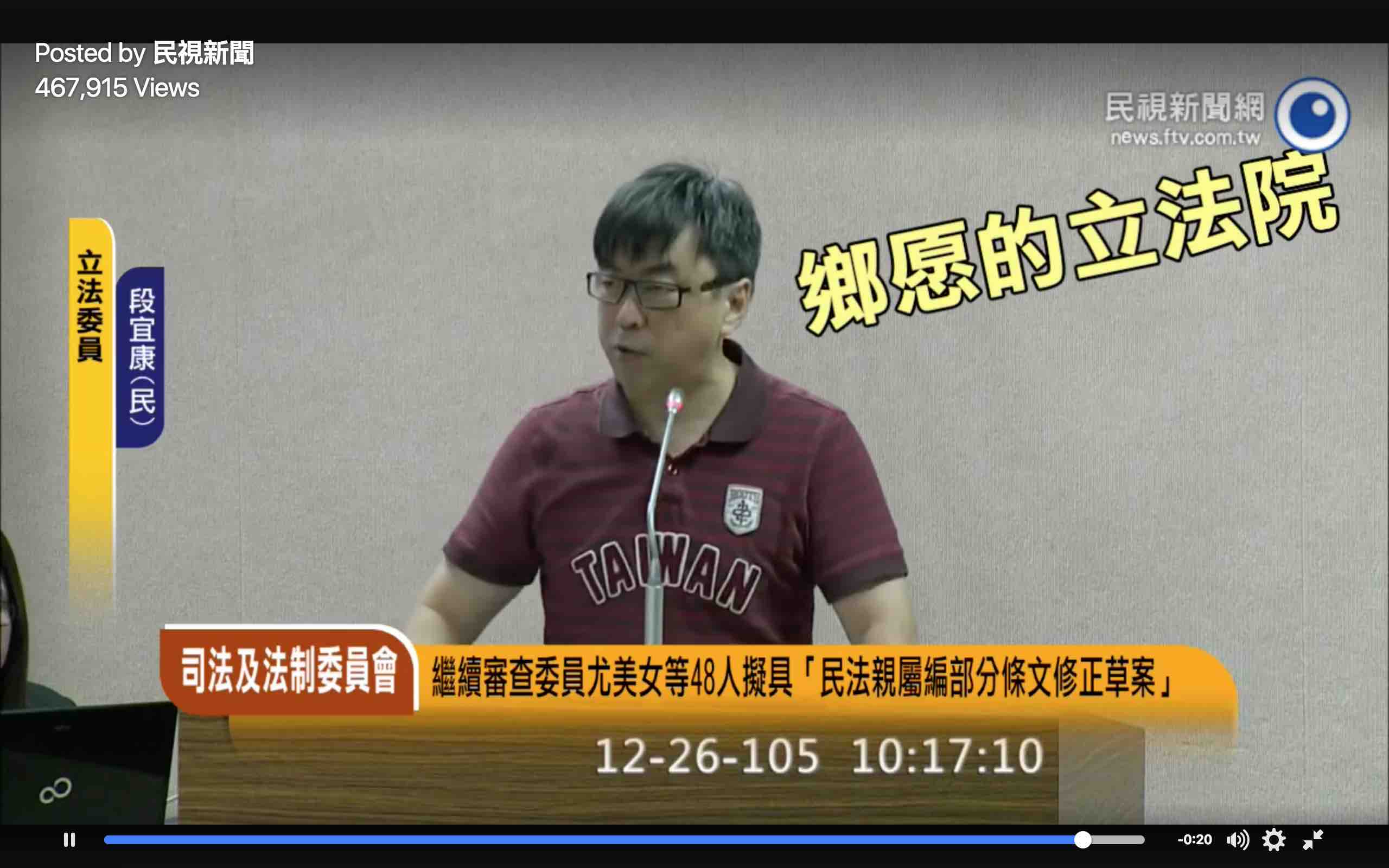